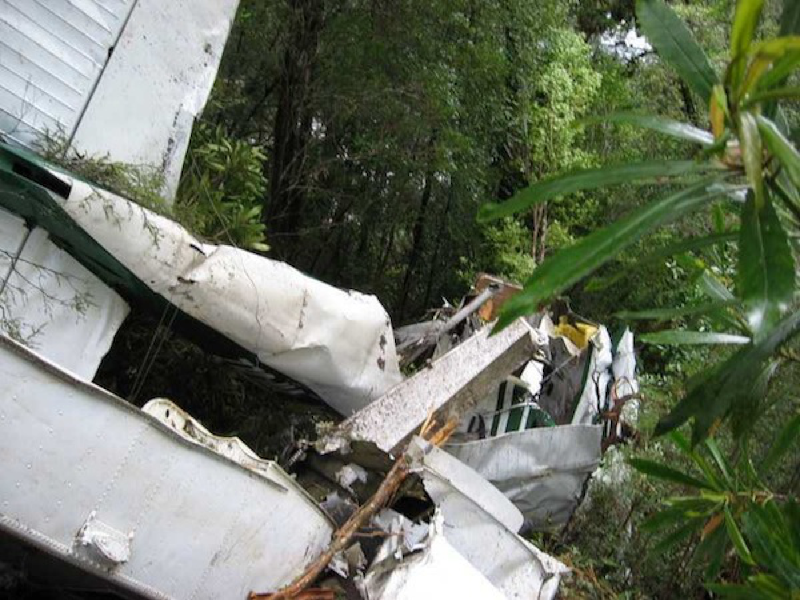 Standing in the middle of the Tasmanian Wilderness surrounded by pieces of smashed-up aeroplane, totally reliant on rescue and with a critically injured fellow pilot as a companion is not a lot of fun. It is not the wish of any sane pilot to experience a major crash and any good pilot has a self preservation instinct that will hopefully prevent such an occurrence from happening. It is unfortunate that just prior to this particular crash two highly experienced pilots had lost all sense self preservation and had ignored sane ways to operate a perfectly good aeroplane. It is either fate or pure luck (depending on your philosophy) that I survived this prang unharmed to tell the sad and sorry tale of how it happened.

Four hours is a long time if you are standing facing a corner, watching paint dry or waiting for a rescue you have no idea when will happen with only the agony of injured companion as company, but during the four hours I contemplated, amongst other things just how I was going to explain how this event happened. The motor could have quit, the wings could have fallen off, the propeller could have had a major failure, all this shit went through my mind and nobody could have ever proved any different but in the end the true story of what happened is more beneficial even if only for a personal lesson in humility.

You see what actually happened is that the two above mentioned, highly experienced commercial pilots managed to stall this particular aeroplane at low level, inside the confines of a canyon over dense rainforest with zero room for recovery. The fact that this crash happened over near vertical terrain that managed to slowly arrest a metal mass that arrived in excess of 60 knots is the only reason we survived to tell the story at all.

Flying a float plane is fun if bush flying, boats and wilderness appeal and it was to the float plane industry that I had turned to, to further my flying career. I had been given a “float alighting gear” endorsement and it had come with no difficulty, it just seemed too easy. I had passed the company requirement of 100 water landings prior to using the Sir John Falls landing area and I was being checked by the company check pilot (CP) into this rather unique and slightly tricky landing area. Landing at Sir John Falls involves a descent through a ravine, around three turns known (very originally) as turn 1, turn 2 and turn 3, past another landmark called “the tree” and onto a long narrow stretch of water that is surely one of the most spectacular wilderness landings in Australia.

The landing goes a bit like this: Arrive at the ravine entrance at 1000 feet, just higher than the ravine walls. By turn one, look for 700 feet which is now below the walls, by turn 2 aim for about 500, rounding turn three 400 feet is good and passing “The Tree” 200 feet is ideal. What unfolds after “the tree” is around 2000 metres of straight water well suited for landing a float plane. The big problem was it was all too easy. What (in hindsight) should have been a quick check ended up being a lengthy process where every aspect of the landing was looked at and re looked at then done again, it was training overkill just for the hell of it. I felt like I was flying at the peak of my capabilities and here a warning bell should have rung. Flying should never be considered easy because easy can lead to overconfidence and overconfidence flying can bite hard.

After a few too many circuits around this particular landing zone we eventually decided to return to base but on the over flight of the landing ground at about 1000 feet the CP decided to simulate an engine failure. What even possessed us to even consider this maneuverer I have no idea but the attempt, (sadly with me flying) to execute a 180 turn to perform a glide landing inside the canyon verged on sheer lunacy. Mid way through the turn, at around 300 feet the plane simply gave up flying and gravity took hold, grabbing the heaviest end (the engine) and plummeting us vertically into the trees below. I can remember crystal clear what a windscreen full of trees looks like, I can remember being briefly stunned by this sudden turn of events and I remember issuing and expletive. I also remember cold fear. 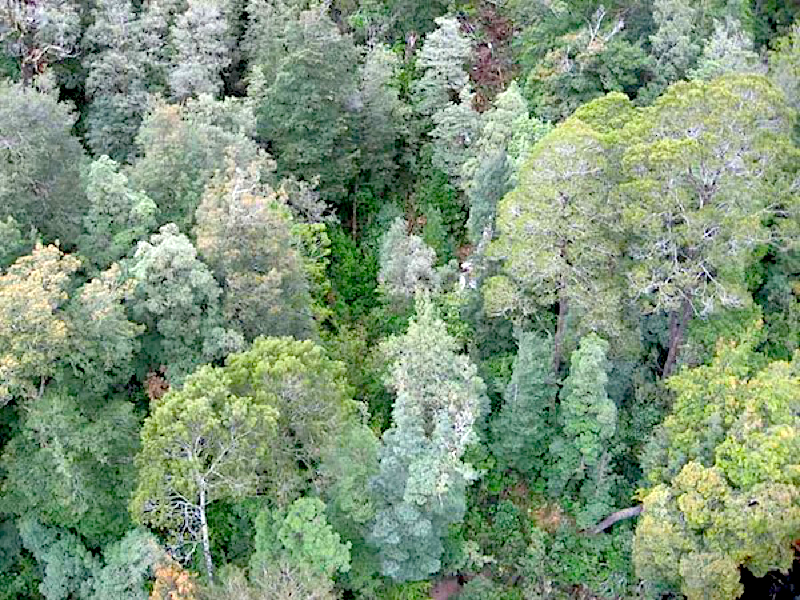 Next thing I was face down on the remains of an aircraft panel, in the remains of an aircraft fuselage, seat belt broken, seats, doors, engine, roof, wings and floats scattered outside and with the remains of the fuselage resting on a slope so steep that walking without a handhold was difficult. I managed to get out and stand, I recall uttering grateful thanks for my survival and I remember the CP climbing out and walking about 10 steps before lying down and stating he didn't’t feel too good. It was the last time the CP walked for 6 months.

Four hours can go slowly, I was in shock but managed to get the CP as comfortable as was possible. Besides having broken legs, a broken arm and a broken back he was soaked in avgas. I remember searching for my wallet and camera, they were in the seat pocket behind me and why I even wanted them is beyond me but I did manage to find them, about 10 metres from the seat which was about 5 metres from my resting place on the panel .... I remember spending about 15 minutes looking for the hand held EPIRB because the fixed unit was broken and useless, lying visible amongst the remains. I remember setting the EPIRB off when I found it. I remember trying to light a fire from the wet under-story wood but the fire didn't’t happen and I remember the company helicopter appearing near last light, closely followed the rescue chopper with its huge searchlight lighting up the rapidly darkening bush. I remember a paramedic descending on a winch and the CP going up on a stretcher on the end of a long line. I remember waiting with the paramedic for a boat to arrive from Strahan to pick us up because the chopper didn’t have enough fuel to linger for the uninjured me. Above all I remember the next day’s embarrassment of explaining just why we had destroyed a perfectly good aeroplane.

It would be easy to just blame the CP but in reality the blame was equal. I had the authority to quit the flying session whenever I wanted and I would have had the authority to stop the forced landing practice as it started. It was me who held the controls at the time of the crash and it was my friend who owned the aeroplane. To say I felt like an idiot is an understatement.

There is one other thing that stands out in my mind. A 185 seaplane is fitted with a steel tube “V” brace that strengthens the wings. It connects from the middle of the dash to the wing ends and sits about 100 mm inside the aircraft windscreen. This “V” brace has been blamed for killing a number of seaplane pilots as it is the first point of impact for your head should you be unfortunate enough to crash. The “V” brace that should have been fitted to this 185 had been removed not 24 hours earlier to have a crack repaired. My head went past where the “V” brace should have been because my seat belt (both shoulder and waist) snapped and my head hit the windscreen so hard I had a star mark for days on my forehead where the Perspex had broken.

Several other things here are worth mentioning: Firstly the broken EPIRB had managed to send enough of a signal in a very short period of time to be picked up. Because of its location search and rescue were already very interested and making inquiries. Within minutes of receiving the signal from the hand held EPIRB a full on rescue was underway. I am now a believer of actually carrying an EPIRB on my person.

The next thing that stands out is the courage and superb skills of the rescue helicopter pilot whoever he or she was. To attempt and then pull off a long line rescue inside a 900 foot deep ravine at night requires a huge skill level that gets my utmost respect.

Prior to this flight we contemplated carrying passengers as it was decided that the check flight should be close to gross weight. In a decision that can best be described as the only really sensible thing we did that day, passengers were ruled out in favour of full tanks and 40 kg of water ballast in row 3. We secured this ballast so well that it remained in place even after the crash but row 2 where passengers would have sat was damaged beyond survivability.

Finally, despite my total embarrassment in stating how all this came about, the flying community rallied around both of us and despite the loss of a valuable aeroplane both of us were forgiven and the whole thing laid to rest quickly. I am still employed by the company and am now the CP.

Sometimes life can dish up a painful lesson! 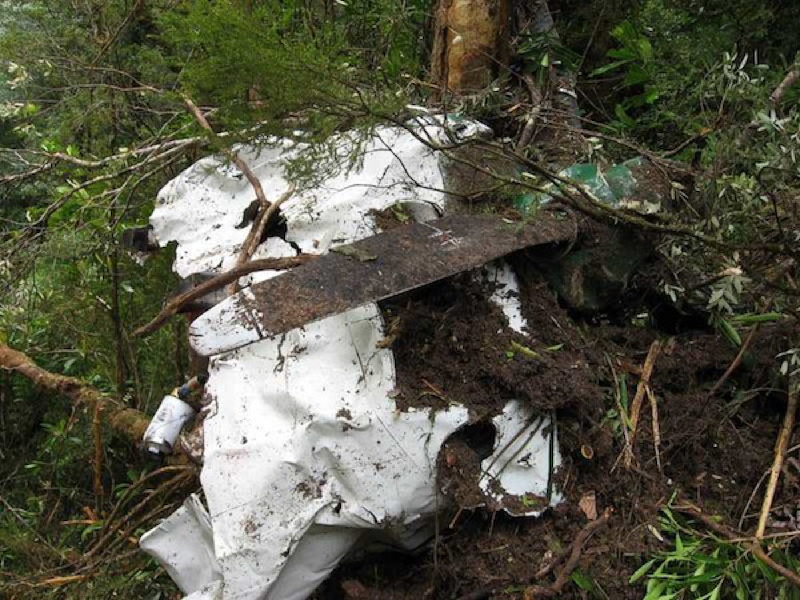