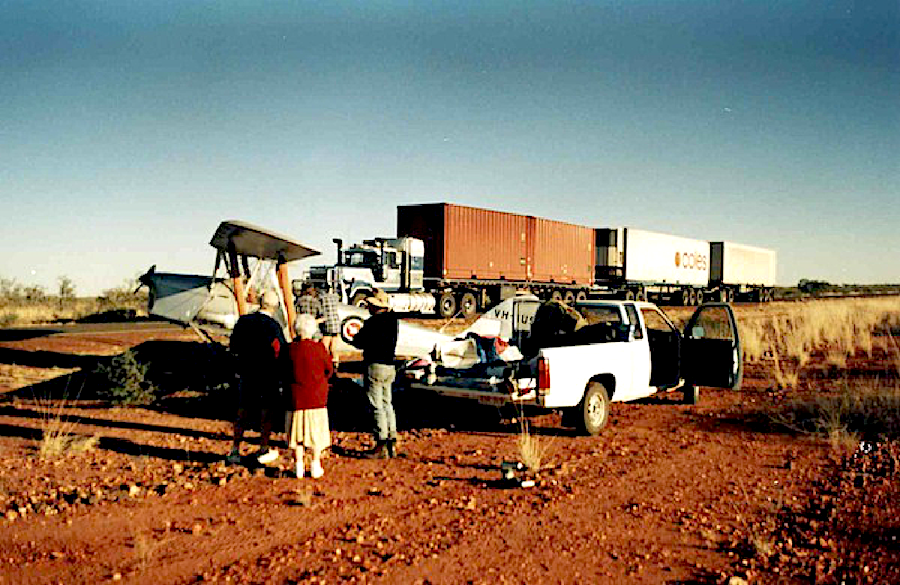 While working at Mataranka in the NT I met a bloke by the name of Les Hiddins. The older TV viewers amongst us may remember Les as “The Bush Tucker Man” on an ABC series with the same name. Les was one of the characters who frequented Mataranka and was a source of much bush info and provided entertaining company. At the time, Les been engaged by the ABC to star as Lewis Lassiter in a film about Lassiter’s Lost Gold Reef, that fabled tale of a reef of pure gold that has become part of Aussie folk lore. Part of the film was to be shot at a remote Aboriginal Community about 100 miles west of Alice Springs.

Apparently Lewis Lassiter was, amongst other things an accomplished pilot and flew a De Havilland Gypsy Moth and Les asked me if I would be part of the film, the plan being for me to fly the Tiger Moth (to represent Lassiter’s Gypsy Moth) from the front seat and have him sit in the back. Frame by frame I would be removed from the front cockpit so it looked as if Les was flying solo. Air to air filming would be done from a helicopter with an experienced film crew and the dramatic desert background would make for some spectacular movie footage. It all sounded pretty damn good to me, Mataranka was plagued by a rather smelly fruit bat colony, tourist numbers were at a record low and my second year there didn’t seem to have the same magic as year one. I told Les to count me in!

I quoted Les a figure of around $3000.00 figuring it would be a bit of fun on the way home to Tasmania. Les looked at me as if I was nuts and told me to quote the ABC at least $10,000.00! I did and got the job. The ABC folks also studiously told me I would need a permit to enter aboriginal land where the film camp was set up. Heaps of applications and phone calls later the permit arrived. I proudly told Les, but he sneered and told me the permit was “whitefella stuff”, where we were off to be “blackfella country” and permits were not in blackfella vocabulary. So much to learn it seemed!

Thus I left Mataranka somewhat before the tourist season ended and headed south, my utility following, driven by a keen for action bloke I had only met a few weeks before named Dave. We had a heap of fuel, some camping gear and loads of water and supplies on board the ute and we were set for a couple of weeks in the Central Australian Desert with an ABC film crew. Dave had no permit to visit aboriginal land, I was learning.

First stop was Daly Waters where we refueled inside the old Bellman Hanger that is all that remains from Daly Waters WW2 heyday. We wandered into the Daly Waters pub for lunch then set off for Tennant Creek and our first nights stopover at Max Tate’s place. Max is the Tennant Creek Gyrocopter instructor and enthusiast and had visited Mataranka several times while I was there. He used to arrive in an old school bus with his gyrocopter in tow on a trailer behind and set up doing gyro “introductory” flights alongside my Tiger Joy Flight business. I had several lessons with Max and quickly gained a respect for “free rotor type aircraft”. It was in Max’s school bus that we slept the night.

Hoping to make “Alice” the following day we set off from Max’s place early but alas Alice Springs was not to be. About 50 kilometers south of Tennant Creek the motor in the Tiger suddenly quit with a huge puff of smoke and Tiger and I drifted down for an uneventful landing on the Stuart Highway in the middle of bloody nowhere. Dave and ute arrived about 10 minutes later and by that time I had already decided that the Tiger would not fly again without a major engine rebuild. The motor, as it cooled had seized up solid.

Dave and I camped for over a week on the roadside at the side of the Tiger Moth where we became somewhat of a tourist attraction, we had an impromptu party one night with a heap of traveling backpackers and met all sorts of characters from road train drivers to pilots in cars and quite a few members of an indigenous community that was several kilometers further south. During this time I arranged to buy a tandem trailer, get a tow bar fitted to my ute and organised a road trip home to Tasmania towing a dead aeroplane.

It was on the final evening of our bush camp that Max arrived in his school bus with gyrocopter on trailer behind and started giving out gyro flights to onlookers who were interested. Right on last light, Dave, ever keen for a bit of action jumped on board the gyro with Max and shortly after takeoff the dreadful sound of silence followed by scrub being smashed up with a fast spinning rotary blade made it apparent that the gyro flight had gone sadly wrong. I sprinted into the bush to look for the wreckage and being unable to locate it in the rapidly failing light sprinted back to the highway fearing the worst and planning to flag down the next vehicle to arrange rescue. 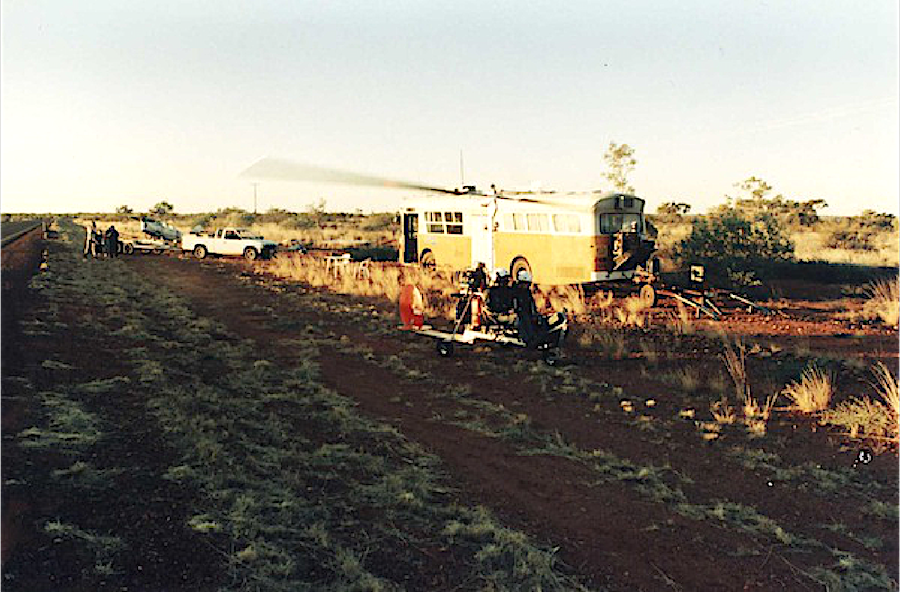 Fortunately back on the highway I found Max and Dave, a little scratched but none the worse for wear and suddenly we had two engine failures, one gyro wreck and a Tiger Moth in bits to keep the roadside attraction alive. Poor Max was as upset as I had been following the Tiger failure and I commiserated, as I knew exactly how he felt. With the gyro and the Tiger both on trailers we parted company the next day, Dave and I heading south and Max pointing north to return to Tennant Creek.

Sadly I never did earn my ten grand or get to fly with Les or take part in the ABC film about Lassiter. In fact I never did find out if the film even got completed, certainly I have never seen it. My carefree Tiger flying days in the NT had abruptly come to an end and sadly I haven’t had the privilege of a Tiger Moth flight since. 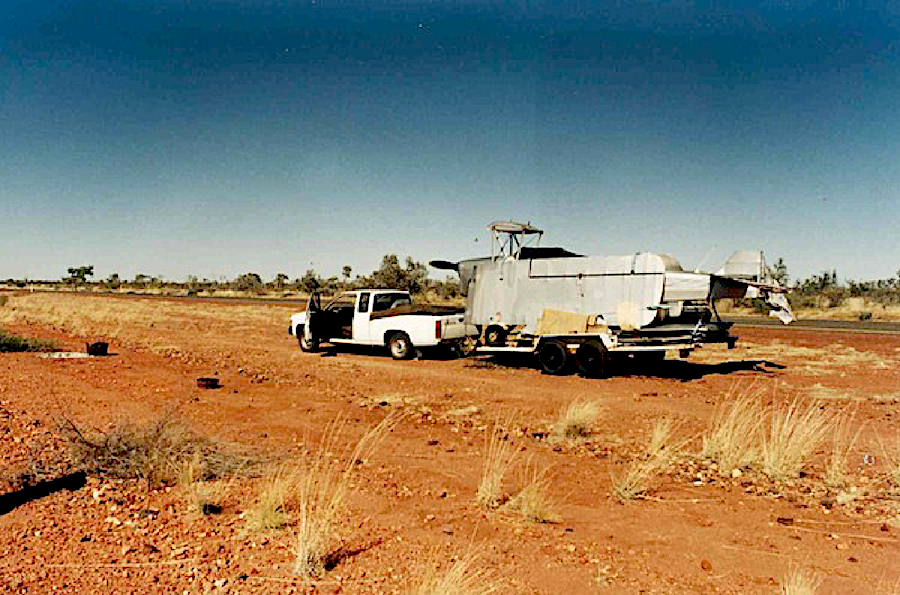